Pricing for Ryzen 7000 non-X processors has now been confirmed.

Rumors about possible Ryzen 7000 pricing were indeed true. Slides from the banned presentation reveal the pricing and specifications of the upcoming Ryzen 7000 series, which is expected to be released next year. Those processors are the so-called 7000 non-X series, which run at a base TDP of 65W. 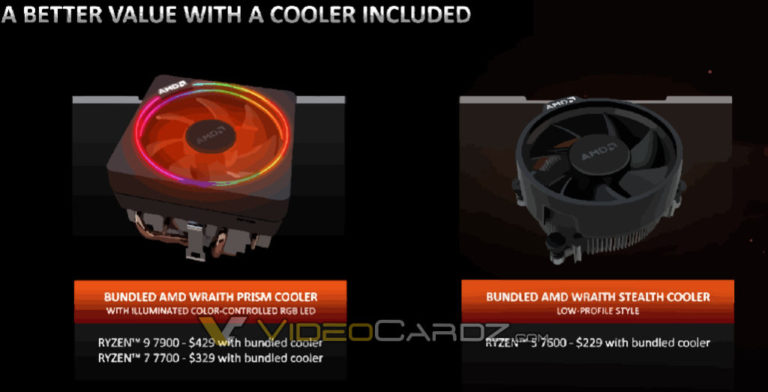 Since AM4 coolers are officially compatible with the new AM5 socket, existing coolers designed and sold by AMD are also compatible with the new Ryzen 7000 series. The 65W processors will be equipped with specified coolers called Wraith Prism and Wraith Stealth. The former will be added to the Ryzen 9 7900 and Ryzen 7 7700 processors, while the latter will be complemented by the Ryzen 5 7600.

Given the recent price cut for the Ryzen 7000 series, it may be very difficult for AMD to sell these non-X SKUs at those suggested prices. It looks like for just $20-$30 more gamers can opt for the 170/105W models instead.

The full embargo on the Ryzen 7000 non-X series will be lifted on January 9th, which should be either the review date or the actual launch date. However, AMD will announce these processors a few days early at the CES 2023 conference.

Support for the National Infrastructure Program, which helps finance the construction of bridges