Staff reporter for the Seattle Times

Carroll said Lockett’s stated goal is to return in two weeks, but the timeline is unclear. The Seahawks medical staff was still evaluating Lockett’s treatment options, and surgery is a definite possibility, Carroll added.

The injury occurred on a pass intended for Lockett in the fourth quarter of the Seahawks’ 21-13 loss to the San Francisco 49ers on Thursday night. 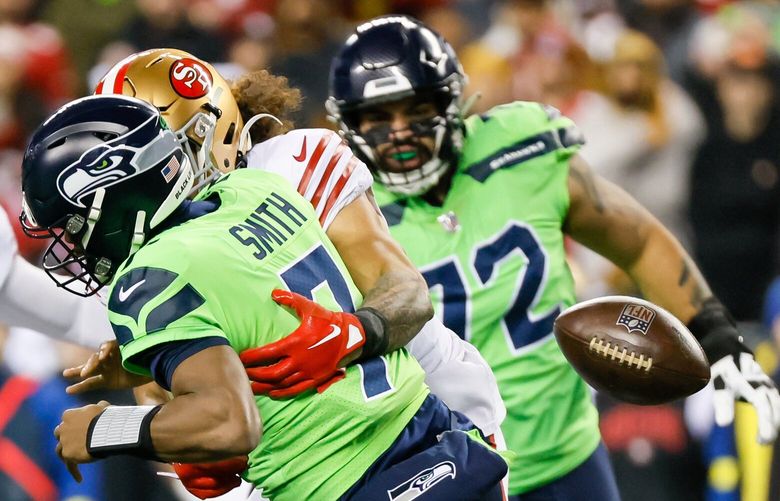 “We have to figure out what the right way is,” Carroll said.
“I can’t even fathom it, I can’t fathom playing without Tyler. I got a chance to hang out with him (in the locker room after the game) just trying to express what it’s like to work with a guy like that for so long. He is such an incredible player. He is not in tremendous pain. He has a broken arm. There is no reason to feel sorry for him. He’s such a great footballer and member of the team and community… we’re going to miss him.”

Lockett, 30, is having one of the best seasons of his career, recording 78 catches for 964 yards and eight touchdowns.

Lockett was voted team captain for the first time by teammates before this season, and he became one of the most respected voices in the locker room.

“I think it’s going to give us a big challenge,” Seahawks QB Geno Smith said. “He’s one of the best receivers in the league. He’s the leader of this team, the leader of this offense, and he’s a guy that we rely on, that I rely on. So we have guys that are ready to step up. You know, I’m looking forward to seeing those guys in their new roles, but you can never replace a guy like Tyler. He’s been doing it for so long. He brings something that a lot of guys don’t. You know, I’m just rooting for him to come back as soon as possible.”

Correction: An earlier version of this story misstated which hand Tyler Lockett injured.

Robert Kraft wants Tom Brady to sign a one-day contract to retire with the Patriots. “I would do it tomorrow.”