Even Tom Cruise’s most mundane statements are accompanied by death-defying stunts. 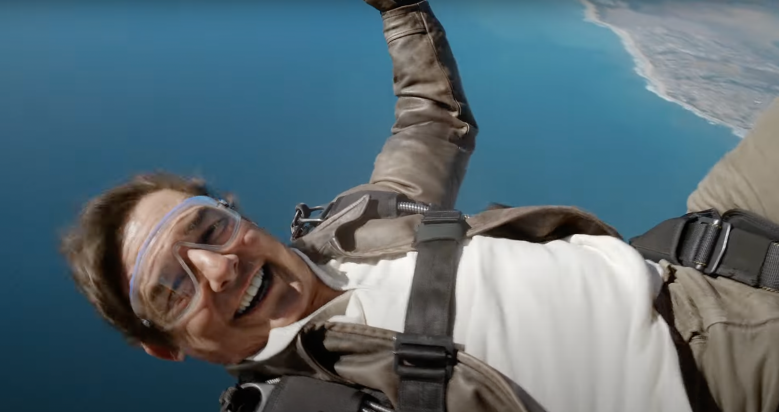 Few Hollywood figures have had a better 2022 than Tom Cruise.

“Top Gun. Maverick was as big a success as it gets, garnering rave reviews while dominating the box office for months on end and proving that there’s still an audience for Cruise’s brand of high-quality blockbusters. The film had the kind of power that most blockbusters can only dream of. Paramount even re-released the film in theaters earlier this month for a two-week run. The film begins streaming on Paramount+ on Thursday, December 22.

Naturally, Cruise wanted to thank his fans for the film’s success, but the dashing actor isn’t doing anything the usual way. Football fans were reminded of that during a commercial that aired during CBS’ Sunday NFL coverage. In the video, recorded in the upcoming “Mission Impossible. On the set of Dead Reckoning, Cruise thanked his fans for his amazing year.

“Hello everyone,” Cruz said from the plane. “Here we are in stunning South Africa, where we are filming Mission: Impossible. And I didn’t want the year to end without thanking you all for coming out to the theaters and thanking Top Gun. To support Maverick.

He was immediately interrupted by “Dead Reckoning” director (and “Top Gun: Maverick” writer) Christopher McQuarrie, who jokingly told him to keep his words brief so they could see Cruise jump out of the plane. Cruz happily obliged and took off into the sky, but he wasn’t done talking.

“Where was I?” he asked as he free-falled. “Oh yes. Thank you for supporting ‘Top Gun: Maverick’ and thank you for allowing us to entertain you. It truly is the honor of a lifetime.”

As he got closer to the ground, Cruise understandably had to cut the announcement short, but not before he wished his fans a happy holiday season.

“My high is running out, so I have to get back to work. We need to get this shot. Have a very safe and happy holiday, we’ll see you at the movies.”

Watch the video below:

Register: Stay up to date with the latest movie and TV news. Sign up for our email newsletters here.