Melanie Griffith showed off her sense of style as she stepped out for a glitzy shopping spree during the holiday season in Beverly Hills on Thursday.

The ‘Working Girl’ actress, 65, was beaming as she carried loads of shopping bags in the run-up to Christmas.

The talented beauty, who is mother to Dakota Johnson, recently paid tribute to her own mother and Hitchcock star Tippi Hedren, 92, with a heartfelt Instagram photo of the mother-daughter duo sharing an affectionate hug.

Shopping Melanie Griffith, 65, was spotted stepping out in a chic ensemble as she stepped out for some holiday shopping in Beverly Hills on Thursday.

The Lolita actress wore a pair of classic light blue ripped jeans for a stylish glow, while adding a tan knit sweater.

She slipped on a pair of ankle, heeled boots and slipped into a long, woolen coat to stay warm in the chilly weather.

The star opted to ditch the stylish jacket to show off her chic ensemble for her daytime outing.

A crossbody purse was slung over her shoulder to keep her hands free to carry her many shopping and garment bags. 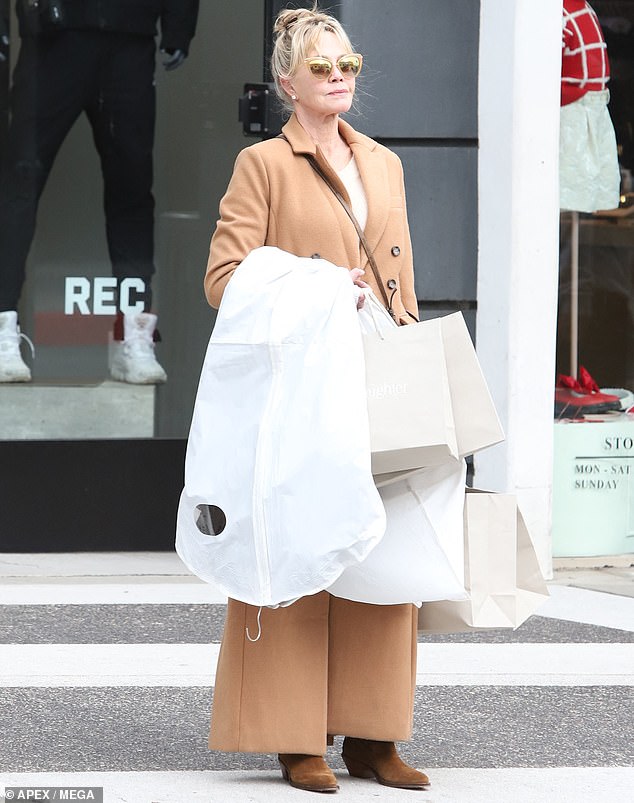 Stylish comfort. The Working Girl actress wore a long woolen coat, knitted sweater and ripped jeans as she picked up some special gifts.

Melanie kept her accessories simple and opted for a brilliant pair of sparkling earrings.

The Golden Globe winner threw on a pair of yellow reflective sunglasses to protect her eyes as the sun peeked through the cloud cover.

Her blonde hair was pulled back into a classic style, allowing a few strands to frame the sides of her face.

Melanie recently paid a warm tribute to her mother, Tippi Hedren, best known for her iconic role in Alfred Hitchcock’s 1963 thriller The Birds. 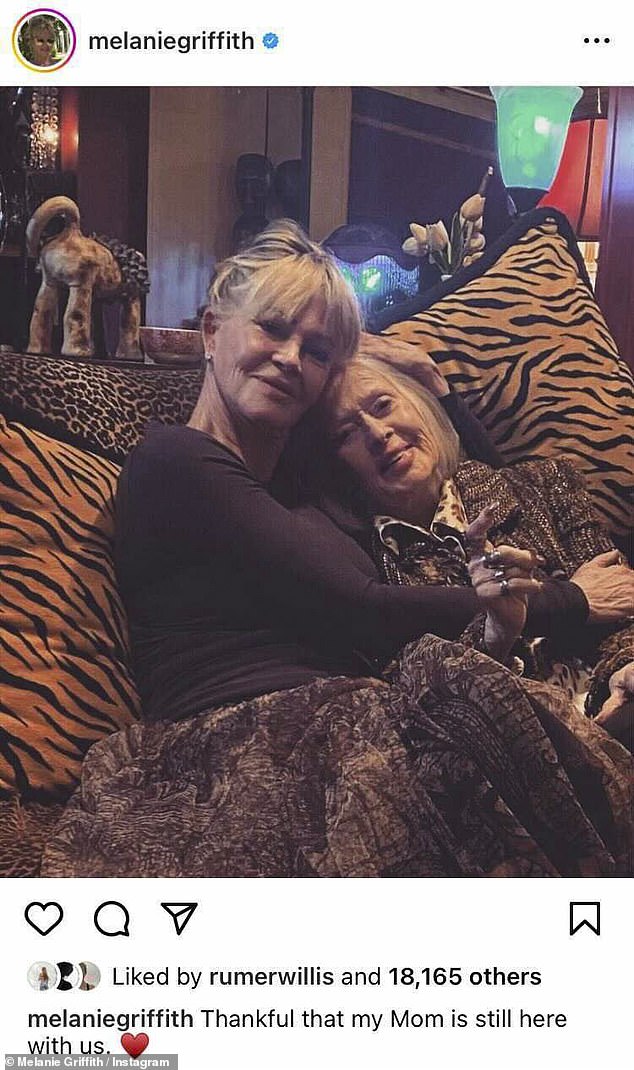 In the adorable photo, Melanie was seen sitting next to her mother as she cuddled up to her on a tiger sofa.

In the caption of the post, the star wrote: “Thankful my mom is still here with us,” followed by a red heart emoji.

The comment was flooded with sweet messages for the mother-daughter duo, including Melanie’s ex-husband Antonio Banderas.

The two Hollywood stars were married from 1996 to 2015 and have one daughter together, 26-year-old Stella Banderas.

The Mask Of Zorro actor replied, “Love to you both ladies,” followed by heart emojis. 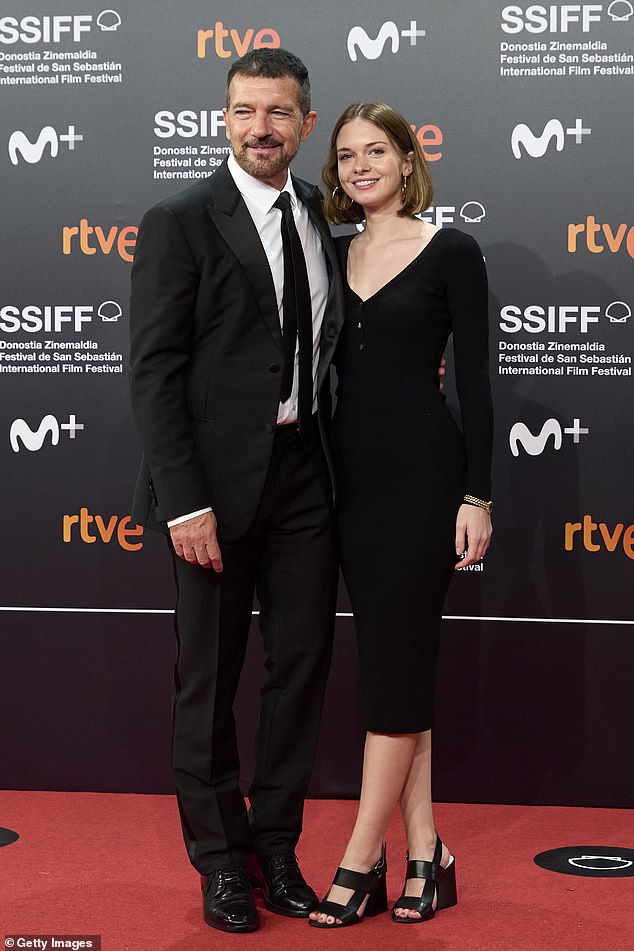 Sweet comments. Melanie’s ex-husband Antonio Banderas (left), with whom she shares daughter Stella Banderas (right), also commented on the post, writing: “Love to you both, ladies.” Antonio and Stella seen in Spain in 2021 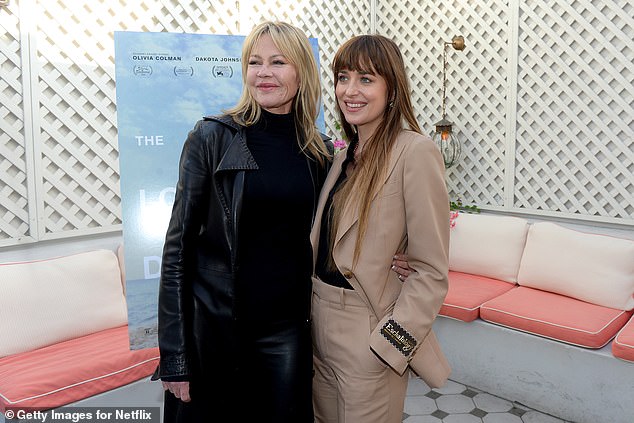 Mother to daughter. In an interview with Vogue, Melanie talked about what she learned from her iconic mother when she was little. seen with Dakota in 2021 in West Hollywood

In an interview with Vogue, Melanie talked about what she learned from her iconic mother when she was young.

The actress said Tippi “taught” her all the basic skills a girl or woman needed to know back then, such as “cooking, cleaning, self-care and most importantly, how to build a safe. space for myself.’

He added: “That’s what I wanted to emulate as a mother, a woman who is happy with herself, who can take care of herself and who knows how to love herself.” 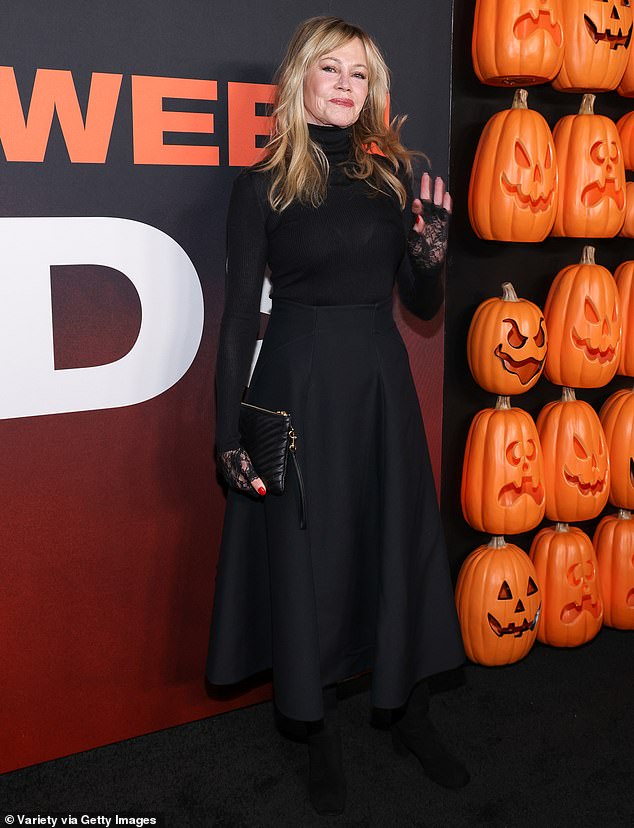 Still as bright as ever. Melanie was spotted at the premiere of Halloween Ends in Los Angeles in October.

The best finds for him and her